I see a lot of photographers and non-photographers posting their “insight” on the Arch Enemy photo situation, so being that I am a photographer who often works closely with Alissa, I figured I would chime in with my 2 cents… take it for what its worth.

If someone reposts your image on instagram (with credit), and your first instinct is to attack them and ask them to pay you obscene amounts of money or trap them into a forced self-created negative pr situation… you need a new hobby or a new job. (I say hobby because most photographers who do this for an actual living tend to know better). If someone reposts an image you don’t want them to repost you simply reach out politely asking them to take it down before you get aggressive and start burning your own bridges toward someone you claim to like working with or claim to be a fan of.

The specifics of this situation is 6 months ago, a lawyer, who is also a photographer got upset at a custom clothing designer who designs Alissa’s stage clothes. Alissa re-posted this photographers image with photo credit and the watermark, and then her clothing designer reposted Alissa’s post of this photographers image with credit and the watermark. He claims the clothing designer was using the image to try to sell the outfit… which isn’t for sale, it was custom made for Alissa. So instead of being polite, diplomatic, or respectful, he sends an extortive message demanding they pay an obscene amount of money (€500) and then guilted them with an “either pay this obscene amount of money, or pay €100 as a donation to cancer research” – which is obviously pre-gaming the post to bash them for “not (forcibly) donating to people in need”. give me a break… this post he made was pre-planned the moment he gave that insane ultimatum (keep in mind this dude is a lawyer). Both Alissa and her friend, the clothing designer, immediately removed the photos after the nasty email and there was some back and fourth… where he continued to insist he is owed an obscene amount of money, and the band said no, the photos had already been taken down anyway and they swore to never use his work again… but he kept pushing asking for compensation after the fact, ending with management stepping in and finally responding that this photographer is no longer welcomed to photograph Arch Enemy (well…DUH). Then… 6 months after the fact… they make this post for attention… slandering the band… and now photographers really think Arch Enemy did something wrong here?! hell no!

Whats the end game there? they donate or pay you and the band never works with you again/tells other bands, their management, their label, their publicist that this photographer will drop a lawsuit if you repost their images on instagram with credit?! – you’re now a liability, there goes your career (or hobby)

Listen… if you photograph bands live, and post those photos, expect people to repost them. If the band reposts them and you don’t want them to, reach out to them, don’t immediately threaten them/send them extortive invoices with out any prior contact or agreement.

These photographers who go after bands for reposting their photos are the same one who complain about photo-releases/right grabs… which exist because of PHOTOGRAPHERS WHO GO AFTER BANDS FOR REPOSTING THEIR PHOTOS. – its an easy way to ruin your career and make sure you don’t work with bands, ever. I wouldn’t be shocked if AE starts having photo-releases moving forward because of this situation, and each photographer who groans about it… this is why. These situations are why they exist. I thought it was funny that in the article he mentioned release forms as something take advantage of photographers, but his actions are what cause bands to implement them.

I am not saying don’t value your work… If a band was using your image for a shirt, for a dvd, for commercial usage, of course you should work out compensation… but don’t shoot a show the band gave you access to and expect them to be obligated to pay you to repost a photo you’d already posted on the internet with out a pre-existing agreement or contact – thats just insanity. Not to mention, a band re-posting your image with credit, showing their vast fanbase your name and your work… absolutely doesn’t hurt your career one bit. Its how my career got momentum… fans, bands, brands, magazines, managers, publicists etc. seeing bands post my photos with my name and watermark on them. This is why I never understood the mentality of a photographer being upset when a band would re-post one of their images (with credit) on social media, promoting that photographer! It is an exercise in ignorant futility to attack bands for promoting you and your work.

If you treat your photography like a constant legal battle between yourself and people who re-post your images on the internet, thats your prerogative… but the amount of time you spend on take down notices for reposts is time you aren’t spending working on your photos or booking more work… seems like a big waste of time. If you post photos of bands you’ve taken on the internet and get upset every time anyone reposts it… you probably should avoid posting photos of bands you’ve taken… or avoid social networking entirely. And while you do own the copyright to your images of course, if you are going to consider anyone who re-posts your post, promoting you and your work, as a copyright infringement case… you are not going to have a good time as a photographer. And while you can message them politely, you absolutely have the right to send over an obscene extortive invoice or cease and desist letter, but whats that going to get you? how could anyone possibly see that ending well? And of course photo credit doesnt pay your bills, but if you expect every band to pay you every time a band re-posts your image on instagram, you are sorely mistaken. And while you can make the argument that photo credit wont pay your bills, I assure you, burning bridges in the music industry is far more detrimental to your bills being unpaid than photo credit.

I hate to see all this negativity coming from the concert photographer realm, but It keeps happening… and its usually from photographers who shoot concerts for some reason. let me help… you should not be a concert photographer if you are this angry about being a concert photographer… do it if you love it. don’t do it if it makes you a miserable person. I also think these situations are what hold photographers back from becoming career photographers… you trivialize the relationship between photographers and their subjects not knowing that sending a band an extortive message (or friends of the band, i.e. THEIR CLOTHING DESIGNER!) will blacklist you and hold your career back. The music world is small… don’t think one band blacklisting you means only one band wont want to work with you… thats seen by many. you are now a liability. bands don’t want to get sued, they don’t want to be threatened. they will tell magazines they wont let you shoot them, they will tell sites and managers and venues and publicists… and i assure you, they all talk to each other, much like many concert photographers do.

I am not saying you should undervalue your work as a photographer or not know your rights with your copyrighted work… I am just saying to keep things in perspective and realistic. if you want to work with bands, don’t damage your working relationship with them. If a band posts a photo with out credit, message them politely and ask them to fix it, if a band reposts a photo and you don’t want them to, politely message them, they will likely remove it, they have plenty of other photos from plenty of other photographers to choose from, If they do not comply, if they are disrespectful to you… that is when you can become upset and take action… but don’t start off your communication by threatening bands, managers, or people who work with the band… it wont get you anywhere but NOWHERE.

pro tip:
scenario one: a company re-posts your image on a social network from one of their artists, with out your permission, you message them saying hi im the photographer of this work, im glad you like it, usually i charge for usage, as I own the copyright, but would like to work for your company and do shoots for you in the future if you ever need a paid photographer. – which can lead to paid hired work.

scenero two: a company re-posts your image on a social network from one of their artists, with out your permission, you message them an invoice for an obscene amount of money demanding they pay it due to copyright infringement, they take down the image and block you, they message other companies, management, and the band letting them know, the management team bans you, and messages the label, venues, publicist, the band messages other bands… all of them block you.

which one of these seem like a better way to go about this?

sure this photographer has a slew of photographers rallying behind them with their post… they also have bands, managers, publicists, labels, etc. reading their post… slandering a band well known for their professionalism and kindness isn’t a good look… and while this may give this photographer a moment of fame… it’ll be their last one… its a coffin nail for any band, label, publicist, or venue wanting to ever have anything to do with you.

Remember, those photos you are upset they are reposting wouldn’t exist with out them… and you wont have photos of bands for others to repost when you’re blacklisted from shooting bands.

So… thats my two cents on it all, burning bridges is a great album, but not a great thing to do with bands if you want to be a photographer in the music industry. 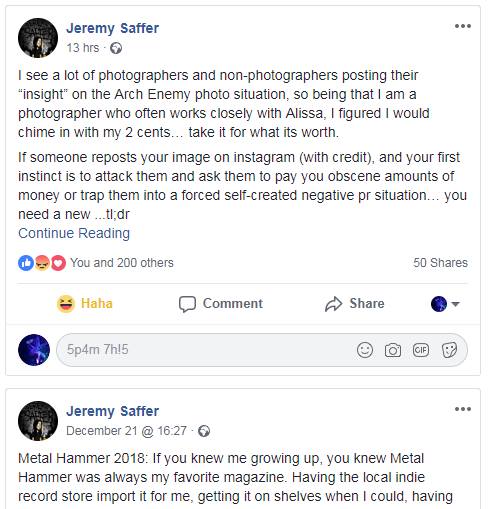 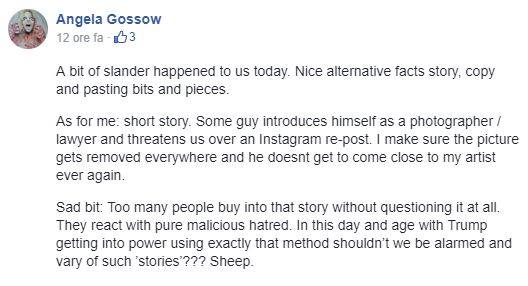