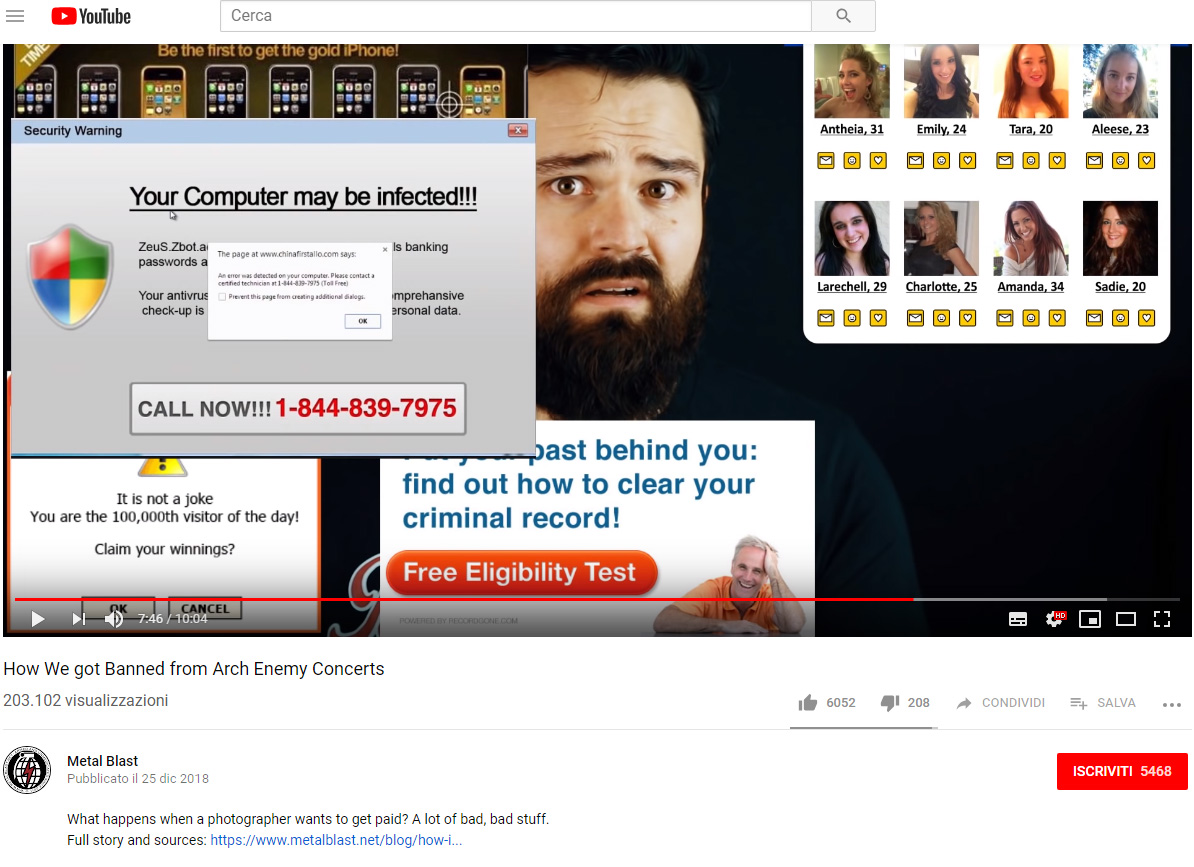 My name is J. Salmeron, I’m a photographer and [an] attorney based in the Netherlands.

I’m contacting you because yesterday you posted my photo Alissa White-Gluz, taken at Fortarock, and used it on your site to promote your products (the photo is uploaded here: [the link is now broken]).  So far the photo has gathered more than 200 likes, and has been viewed, of course, not only by your over 10 thousand followers, but also by anybody looking for tags related to Alissa White-Gluz.

Your use of my photo is unauthorized and, as I’m sure you are aware, represents a clear and blatant breach of my copyright. This infringement is, of course, made more serious when we take into consideration that your use of my photo is in connection with your business, which you are trying to promote with this post.

In general, I charge a fee of at least €500 (five hundred Euro) to businesses that have posted my work in an unauthorized manner. In this case, however, I would be willing to forget about this problem and let you keep up the above post in exchange for a donation of €100 (one hundred Euro) to the Dutch Cancer Foundation. This is an organization that seeks to benefit cancer research as well as improve the quality of life of cancer patients. I can send you a link for the donation (which would be direct to the foundation, not through me) if you accept this method of payment.

I am looking forward to hearing from you.

We have immediately removed the picture you took at FortaRock. By the way, we are sure you don’t mind that you are not welcome anymore to take pictures of Arch Enemy performances in the future, at festivals or solo performances. I have copied in the label reps and booking agent who will inform promoters –  no band wants to have photographers on site who later send such threatening correspondence to monetise on their images.

Btw, the email below was not from Marta, but from Alissa herself personally. The artist you blatantly wanted to sell the picture to. Nice price tag. 500 EUR. In bcc the band so they know about you in the future.

Thank you and have a nice day!

Btw – we do frequently donate to charity, but on our own terms and free will. 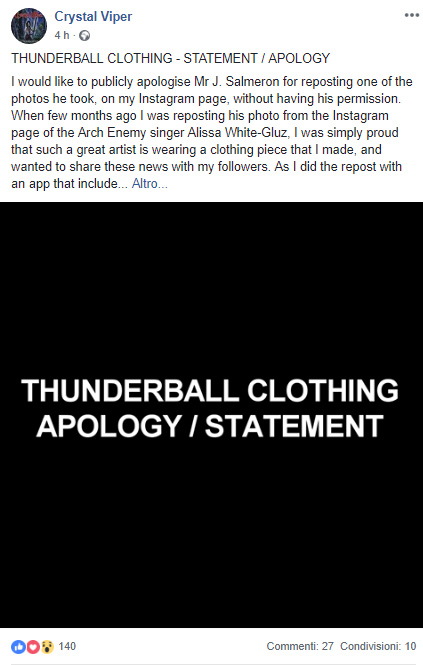 THUNDERBALL CLOTHING – STATEMENT / APOLOGY
I would like to publicly apologise Mr J. Salmeron for reposting one of the photos he took, on my Instagram page, without having his permission. When few months ago I was reposting his photo from the Instagram page of the Arch Enemy singer Alissa White-Gluz, I was simply proud that such a great artist is wearing a clothing piece that I made, and wanted to share these news with my followers. As I did the repost with an app that included all original credits and watermarks, I thought that it’s OK. I meant no harm, and it wasn’t my intention to promote any product, however, I do agree that it might looked like that, and I understand that the author of the photography could feel upset about it. And I am sorry about it.
After I received an email message from J. Salmeron, who introduced himself as a lawyer and author of the photography, I interpreted it as another spam or scam (well, all of us receive this kind of emails all the time). I saw the amount of 500 Euro and the name of Alissa White-Gluz, from whom I reposted mentioned photo, so without going deeper into that message, I did what I thought was most logic – I contacted her, forwarded the original message that I got, and asked her what to do. I was instructed to take down the photo (what I immediatelly did), and was informed that someone else will take care of it. That again seemed logic, as I was aware that I’m not at the position of taking any actions on behalf of Arch Enemy, nor their members. I had no other contact with J. Salmeron, I haven’t heard from him since then, and to be honest, for the last 6 months I had no idea that something is wrong, especially as the photo was taken down.
That being said, I would like to apologise J. Salmeron once again. Not only I’m willing to discuss with him how to compenaste him and fix the situation, but also how to make sure similar situation won’t happen ever again. After all, we’re all playing in the same team, and we all have one thing in common. We love music.
Marta Gabriel, Thunderball Clothing 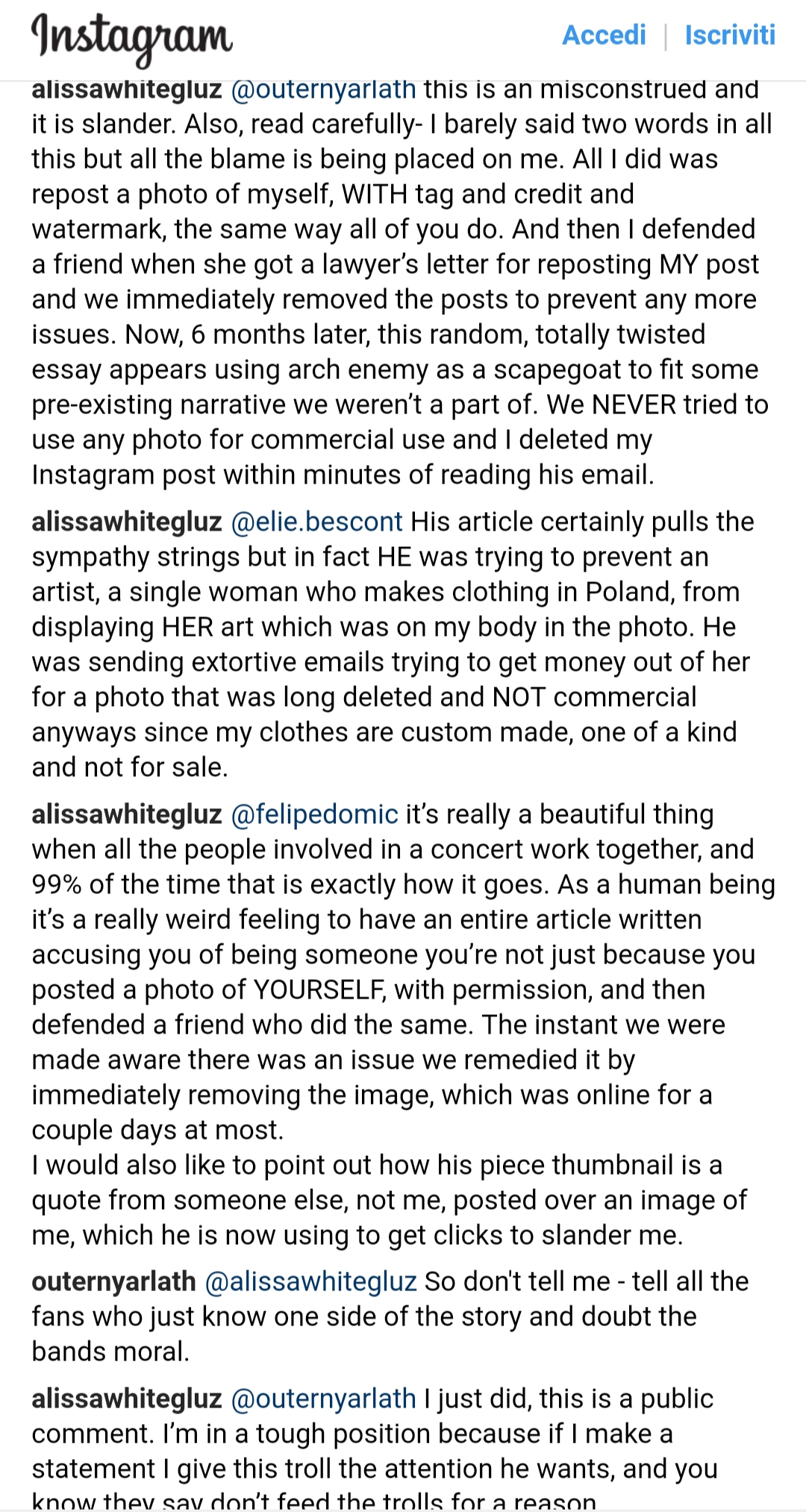 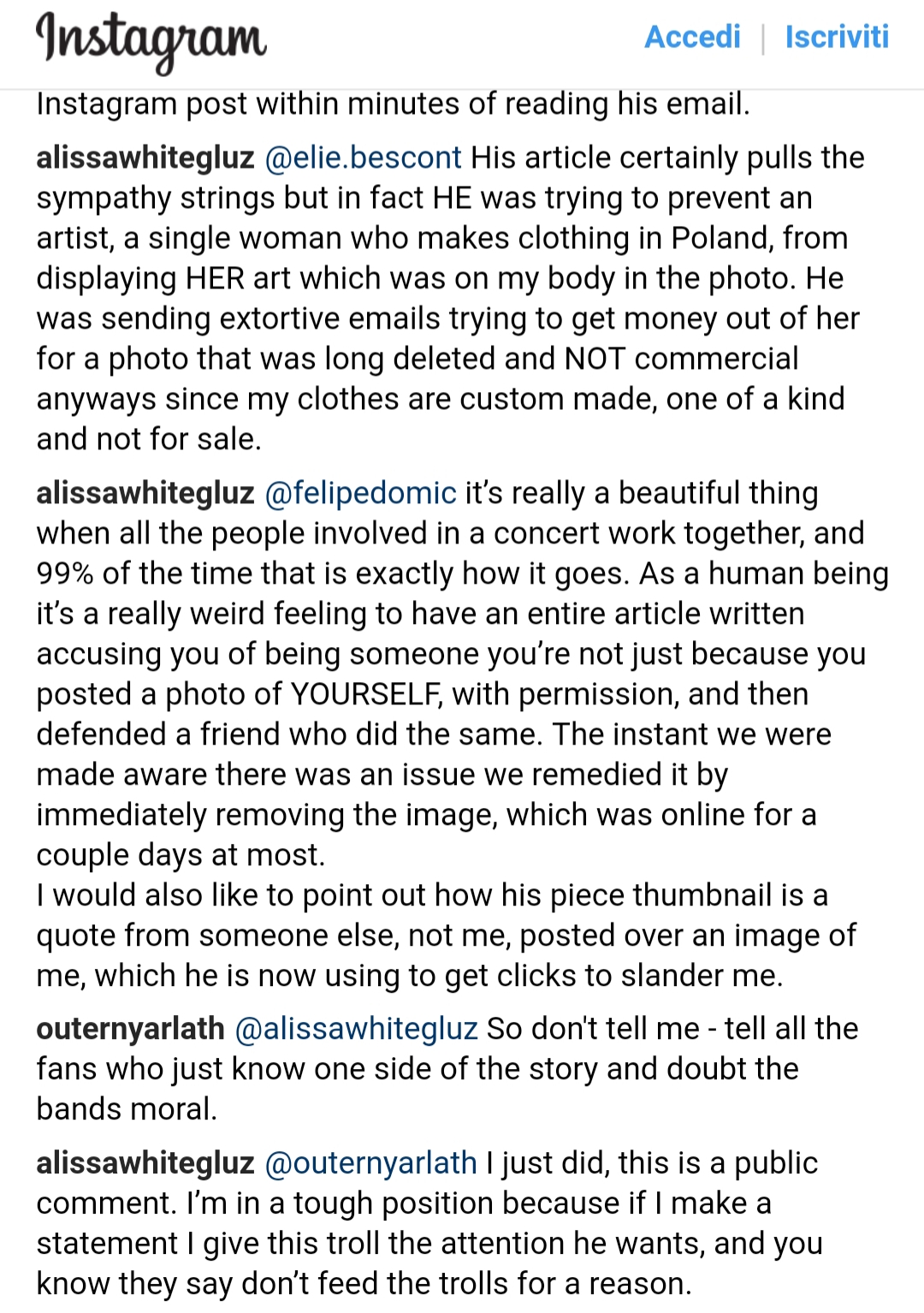 In early June, I reposted a photo of myself on instagram from a concert photographer, which is common practise. The photo was already posted to Instagram by the photographer himself. I like doing this because it is a way to say thank you and tip my hat to photographers and usually there is a nice symbiotic relationship between bands and photographers this way. If you follow my socials you know this is something we all enjoy. His watermark was visible, the photo was unaltered and he was tagged and credited in the caption, the way we always do it. The girl who made the outfit I am wearing in the photo, Marta, reposted my post shortly after that. She didn’t print it, didn’t use it commercially, didn’t upload or copy it – she reposted it with a free Instagram application called “get_repost”, like many of you do. She was just happy to repost the news that I wear her creations (one of a kind clothing items we designed together, not a product that you can buy), and share it with her followers. 99% of the time, this is how this online world functions like a supportive community and everyone wins this way. Often, photographers send us folders of photos in hopes that we like them and we post those, always with their name and credit. We really felt we were doing just THAT.

The photographer of this particular photo was ALWAYS fully credited for the ENTIRE duration of his photo being on my Instagram and Marta’s. As soon as he expressed discontent the posts were immediately removed. There was never ANY attempt made by Thunderball or Arch Enemy to use that photo for commercial use, and certainly not without compensation. To our understanding, since there was nothing being sold or advertised in the posts, it was not commercial, but we still took his concerns seriously and immediately took the photo down. To be clear, this is not a photographer Arch Enemy hired, this is one of the hundreds of photographers who are in the photo pit at festivals. Once the photographer stated he wanted a fee for online use, we immediately (within minutes) agreed to remove the posts (which were online for a few days at most) so as to avoid any complications. If we were going to use a photo for any commercial application, we would pay them and there would be a contract ahead of time, like we always do and have done with hundreds of photographers.

Marta forwarded us an email from a lawyer saying she owed 500 euros, was in breach of copyright and the email included payment method information. Marta goes by the name Thunderball Clothing online and is a fellow musician, artist and one-woman clothing maker from Poland. We tried to explain that this photo isn’t selling anything, it is showing off the custom outfit I am wearing, but the emails felt more and more coercive, so we simply removed the posts. There was no product for sale in the photo and no attempt to keep using the photo once the photographer stated his discontent. I understand that there are laws in place that dictate when and how a photo can be used, although promotional online use is usually appreciated, especially when it provides exposure for all parties involved. But, the photographer was unhappy with the reposts so we removed them, plain and simple.

We didn’t want any trouble so we deleted the posts and thought that was the end of it since we had no contact since June. Normally, in my experience, people are happy to see the subject of their photo sharing their work and its a beautiful thing to be able to have one concert experience be a platform for musicians, lighting directors, clothing designers, photographers, sound engineers and fans alike all sharing in the art that is created.

All that happened here was I simply posted a photo of myself with full credit, watermark and tagging, then took it down when a lawyer contacted my friend who was among several pages that reposted it. Lots of fan pages are run by teenagers in countries where there may be different laws or a language barrier, who might not understand, and I didn’t want them to end up with some lawyer’s letter in their inboxes, and I know they like to repost things I post, so I just took it down. I’m not really sure why this non-issue has been twisted to scapegoat us 6 months after the fact, especially considering we simply did what he asked and the last interactions I had with him, personally, were pleasant.

We reserve the right, however, to decide who is allowed to photograph our shows and after having corresponded with him we didn’t want any more issues like this in the future, especially when passes are limited and we know so many photographers who love having the opportunity to get a photo pass and have fun with us at shows.

In conclusion, no one from Arch Enemy nor Thunderball ever denied paying the photographer in question for the commercial use of his photo: We simply did not use it.